Errors in Plugin Manager, yet plugins seem to still work

I hope i’m posting this in the correct section.

I have a question about plugin manager error messages/blacklists

I have a number of plugins that appear in the Error list – yet a version of them will also appear outside of the Error list and are indeed functional.

As an example I’ll use Robin’s Whirl Speaker plugin:

I am able to load and use b_whirl#extended and b_whirl#simple on tracks in Ardour. In plugin Manager those two items are listed as OK. All good so far.

However, b_whirl.so and b_whirlUI_gl.so appear and are listed with an ‘Error’ in plugin manager and under the ‘Type’ heading in the manager, I’m seeing ‘VST2.x’.

So, on one hand I seem to be able to use the plugins and yet there are some files within the b_whirl.lv2 directory (which for me is in usr/lib/lv2) which are showing as failed scans.

The vst2 part is particularly confusing me because the plugin folder is labelled as b_whirl.lv2, so I am assuming it only contains lv2 plugin files.

I have the same kind of thing happening with the setBfree plugin, where I am able to use the plugin as expected and yet in plugin manager, b_synth.so and b_synthUI.so are showing as Errors, while b_synth is showing as OK.

Likewise, Simple Scope and Meters and such are also following the same kind of suit.

Similar errors are shown for a few other plugins, like DrumGizmo – which does have both lv2 and vst versions, both of which work and yet I am seeing drumgizmo.so showing as an Error in plugin manager, despite drumgizmo_vst.so and it’s LV2 counterpart (oddly just named lv2 in plugin manager) are listed as OK.

DrumGizmo was installed via KX Studio repo, but the setbfree and whirl plugins were downloaded from x42 website and manually placed by me in my usr/lib/lv2 folder.

The majority of plugins I have installed don’t have any issues like this, but there are a handful that have this kind of thing happening. I’ve been trying to troubleshoot this on and off for a month or so but I haven’t really figured it out. Since I am able to use the plugins as expected (as far as I can tell at least) it hasn’t been a major priority, but I would like to clear it up if possible.

Here are some screenshots as an example of what I’m looking at: 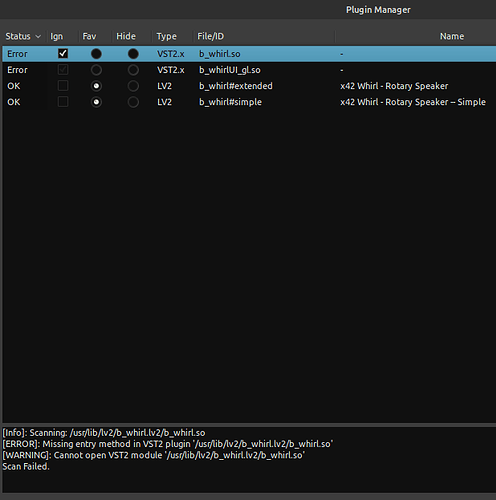 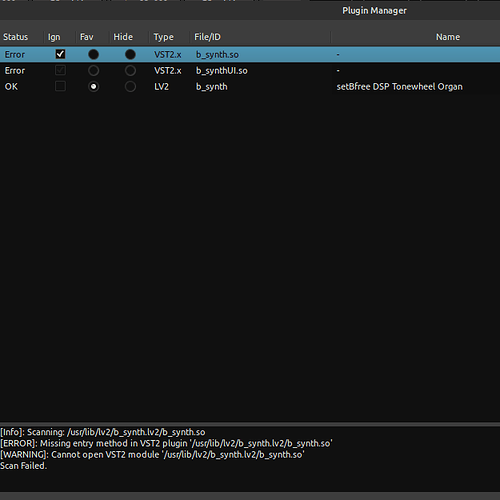 The problem here is that the plugin is in LV2 format, but you asked Ardour to scan it as as VST.

To solve this edit the VST plugin path and remove /usr/lib/lv2 (either using the button bottom left in the Plugin Manager, or in Preferences > Plugins > VST)

LV2 plugins are automatically scanned at application start and do not require configuration.
Ardour (really liblilv) searches LV2s according to the Filesystem Hierarchy Standard

Wow, I didn’t even catch that – you are correct, that was exactly the issue. I suspected it was likely user error. I think the last time I did anything with plugin paths was 2 years ago when i was just starting out with Ardour, so this must’ve been a mistake I made back before Ardour 6 came out and has carried over since.

Thanks for pointing me to the solution, Robin!