Duplicating automation together the region

Is it possible to duplicate/copy automation together with a region?
I copied several regions from different tracks because I didn’t have the original plugins anymore, I created other tracks and I copied the regions from the old ones.
But I have an automated fader that I’d like to copy since it would be painful to do it all over again.

Automation (non-MIDI) does not belong to regions, it belongs to tracks/busses.

If you work on fader automation that is based on the region contents, you should likely be using the region gain envelope which will always be copied with a region.

Can it be copied by editing the project file in a text editor?

It’s not what the OP asked for, but range selection works. Selected automation lanes are copy/pasted along with any selected audio/midi lane ranges. 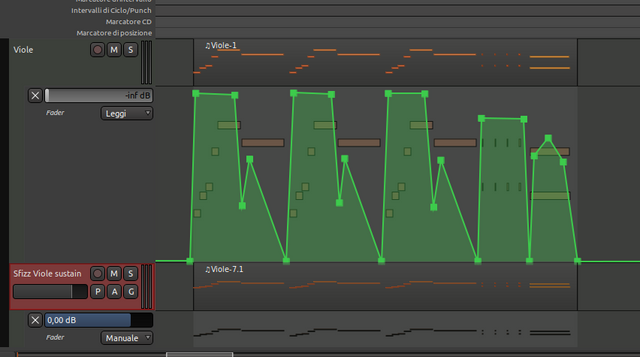 That would be a very useful option in Ardour in cases like mine.

Automation (non-MIDI) does not belong to regions, it belongs to tracks/busses.

I can understand why this was done from a programming point of view, but what’s the practical purpose for tracks? Are there many occasions where you would want automation unrelated to a region?

It’s also a reflection of the fact that automation for plugin parameters can continue to have effects well beyond the apparent bounds of the region (reverb being the obvious example). This one would be best handled via per-region plugins, which is easy to implement in the backend, but hugely complex on the GUI side.

Just a tip… As I’ve noticed - “R”(Range)-mode selection can be copied into a different automation track (no matter what kind of controller in any synth or just a track fader). In my case I copied a fader automation, and pasted it into the fader & also cut off controller of Helm. Only one special thing I need to do - to select the desired automation track before the pasting:

P.S. I use [Mouse] Edit Point mode to define the position of pasting

Also the “Duplicate” track function copies all the automation. It’s not the same as duplicating of the region, but as an alternative…

I have to try Cooltenho method, Duplicating the track doesn’t work because I have to create a blank track, choosing sfizz plugin and paste the timeline, anyways all the regions on that track. If I duplicated the track, I couldn’t change the plugin.
I tried to change the plugin on an old track switching from Calf Fluidsynth to Sfizz and it didn’t work.

I tried to change the plugin on an old track switching from Calf Fluidsynth to Sfizz and it didn’t work.

What step is not working in your case?

In the end it’s possible it’s doable. I followed Coiltehno’s hint.
It’s not duplicable as a whole track, I can only duplicate the sound track, without automations. Then I can copy paste them, even on the same timeline.
Good to know.

Nice job, Cool, so it can be useful for anybody