Again, a big thanks to @Michael_Willis for these amazing reverbs. I have a few questions after reading the manuals:

Thanks for any help with this!

Fantasic, thanks! I will give these cathedral-style reverb settings a try. Do I remember you saying at one point that you might consider adding a couple of cathedral and church presets into Dragonfly?

If I may… aside from potentially reducing default modulation value, what would prompt you to work on a version 3 at this point? Has the underlying reverb algorithm been updated since version 2? Given you have lots of colors to choose from, are there any suitable Freeverb3 algorithms for potential Dragonfly Chambers, Plates, or Ambience?

Trying to find out the details on Freeverb3 is quite difficult. For example, the homepage makes no mention of Hibiki (and no ability to directly click on any of the included effects including the one based on “FDN zita Reverb” which I assume is “Hibiki”). A Google search gets me to the page but it’s hardly user-friendly! I guess that’s why you decided to make Dragonfly in the first place?!

Heh… yes, the documentation should probably give better credit to Freeverb3, along with links to proper documentation.

I didn’t want to let the cat out of the bag this early, so to speak, but since you asked… I want to make a plugin that only runs the early reflections algorithm, since I’ve seen one demo with the late level at zero, which is a completely different purpose than using a reverb called “Room” or “Hall”. The original two plugins would remain mostly untouched; I would not remove the early algorithm from either of them.

I’m also considering making a plate reverb plugin based on this: http://freeverb3vst.osdn.jp/tutorial/tutorial_vst_strev.shtml … I know, the world probably doesn’t need yet another plate reverb plugin, but when did a SUPERVILLAIN ever care about what the world needs? MWAHAHAHA…

The reason I’m asking the follow-up questions is because by chance I came across a way of combining plate and hall to make a dry harpsichord sample come to life. The thing that is missing from most libraries is the soundboard resonance that acts almost like a mini-cathedral all by itself. So, I tried a dark plate followed up by regular Hall (no early reflections) and the effect was good enough that I want to keep exploring the options. The plate simultaneously placed the instrument into the room, so to speak, via the early reflections, and then gave it the resonance. The trick, of course, is not having the reverbs clump up and get too much in the way. When it comes to turning to EQs etc, I consider that the effect is getting too complicated.

So, all this being said…if you are looking at an early-reflection-only plugin, would it have functionality of being able to place into a space, a little like Mir or 2CAudio’s Precedence?

@bachstudies I’m curious to hear what you are doing with Dragonfly Reverb. Do you have any recordings online somewhere that I can listen to? Also I would like to know what settings you use. If you find some good things that are different enough from the existing presets, you could probably convince me to add more.

I’m curious to hear what you are doing with Dragonfly Reverb. Do you have any recordings online somewhere that I can listen to? Also I would like to know what settings you use. If you find some good things that are different enough from the existing presets, you could probably convince me to add more.

I will have recordings. I plan on using Dragonfly on my Bach Project next album. I will begin recording very soon given that I’ll be able to tweak reverb after-the-fact. I track directly to audio most of the time as my project is “live” with no edits etc. The question as to whether it will be a single hall instance or an attempt to combine a plate or similar with hall will be answered by the sonority of the particular instrument and whether I have the time to tweak endlessly

So, all this being said…if you are looking at an early-reflection only plugin, would it have functionality of being able to place into a space, a little like Mir or 2CAudio’s Precedence?

I hadn’t considered that a plate algorithm might be a good representation of the soundboard! That totally makes sense though, since a soundboard is really just a giant metallic plate.

I hadn’t considered that a plate algorithm might be a good representation of the soundboard! That totally makes sense though, since a soundboard is really just a giant metallic plate.

I guess it also works because plates are kinda nondescript in the sense they are not trying to recreate a particular type of space? Again, it was by chance but no idea if the plate I tried (some dark large plate in Phoenixverb) is the best option. Obviously my next step is to chain a Dragonfly plate with a hall preset and see what happens. I really don’t want to overthink this if a single instance of a reverb gives a clearer, more enjoyable stereo image but it is a line of investigation when things are calm.

Do Room and Hall use the same early-reflection algo?

Obviously my next step is to chain a Dragonfly plate

I can’t make any promises about delivering a Dragonfly Plate plugin, but you could try the plate presets of Dragonfly Room Reverb, under the “effects” tab.

Do Room and Hall use the same early-reflection algo?

Yes, and they use it almost precisely the same.

I can’t make any promises about delivering a Dragonfly Plate plugin, but you could try the plate presets of Dragonfly Room Reverb, under the “effects” tab.

Yes, that’s what I meant

I’m not expecting you to cook up a separate plate plugin before I release the next discs! Although a real super-villain could, I suppose…

The true mark of his super-villainosity (?) will be when he commands all the reverbs in the world to rise up against their makers, and subsequently transform them into “late” reflections.

No way, I’m not that kind of supervillain. That’s Sean Costello. Why else would he name his reverbs Valhalla?

Why else would he name his reverbs Valhalla?

I thought he named them after an old flame, Valerie Halla…

Here you go, try out the beta release of Dragonfly Plate: 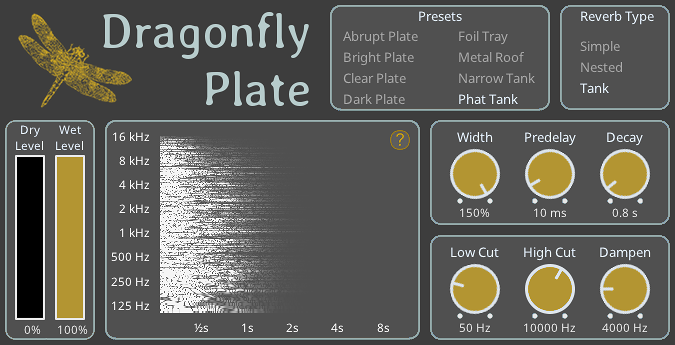 You are too funny! I looked at the screenshot and thought you had simply done a mock-up but there’s a beta version sitting in Github. It’s too late for me to try this evening but if it’s the real deal, I crown you the world’s no.1 SUPERVILLAIN (of reverb)!

I’m another fan of Dragonfly Reverb. I don’t have a Linux machine at the moment, so I’m using it on Mac. The Mac I use for audio and video work runs Mojave and I’ve had no problems there, but my test machine is on Catalina and in the VST scan in Ardour or Mixbus I get a message from MacOS that Dragonfly Reverb is from an unknown developer and can’t be opened. There’s no option to “open anyway,” the only options are to skip it or send the VSTs to the trash. Do you know of a workaround?

@bradhurley I’m not sure about that. Are you trying the beta release that I just announced, or a previous release? I built it on Mojave and didn’t have any trouble there, but I haven’t tried Catalina. Does that just happen for the VST, or have you tried the LV2 also?

Thanks, Michael, I’ll try the beta; I’m using a previous release. I also haven’t tried the LV2, just the VST. It’s not a crucial issue for me since my workhorse machine runs Mojave and I’m using Dragonfly Reverb on most of my projects there, it’s fantastic (and when I do finally go back to Linux it’ll be my go-to reverb there too).

Edited to add: I un-blacklisted Dragonfly on my Catalina machine so I could see the error message again. The issue is that the normal way to override this doesn’t really work for VSTs as I don’t have an app that can open a VST. Here are the instructions for overriding (this works in Mojave too). I use this procedure frequently but am stumped in this case because a VST isn’t an app, nor is it a file that I can normally open outside of a DAW. Is there an application I can use to open it and thus override the security settings?