Can you please describe the most important changes/feature-additions? Something like a changelog?

It's been a long time since the last release of Ardour, and there's still no schedule or even vague sense of when the next release might appear. I (Paul) felt that our users, and particularly our subscribers, deserved some information about what is and has been going on with development over the last 8 months. I had promised to do this back in December, and it is now long overdue. The core developers of Ardour (myself and Robin Gareus, with help from Ben Loftis) have been involved in some m…

Many people have asked about an update to the post from June 2018. I’m sorry things have been so quiet here regarding development, but be assured that plenty has been going on, at least from a programming perspective. Development was definitely impacted by Paul’s move to near Santa Fe, New Mexico, but now that is largely done and settling in there is well underway, he is now back in action. Here’s a photo of the current state of the new Ardour HQ, in Galisteo, NM (soon to be radically different…

We will provide a more complete list when the release is actually ready.

Congratulations for the awesome work. @paul Regarding bug triage, I’ve unsuccesfully tried to change the Product Version field, but couldn’t. Do I miss something obvious, or should I just add a “6.0-pre1” tag or a “6.0-pre1” comment ?

yay! I was just about to give up on Ardour 5.12 – I love it and it’s the daw I learned on but there’s a lot of pain points … note on/off quirks, regions that begin and end at the same time showing up as stacked in stacked view, notes disappearing and being silenced when they start at the same time as a region … basically a lot of simultaneity problems. It’s all due to floating point error, right? I think I read something here about that.

I’d been giving Waveform Free a try … don’t bother, I had lots of UI freezes and two outright segfaults in just a couple of hours … and had been psyching myself up to splash out for Bitwig … but now an Ardour 6.0 RC gives me new hope for this janky but otherwise awesome product! thanks at all.

Reports from users who’ve been with us along the journey from 5.x report that a majority of the problems with dropped note on/offs and disappearing have been fixed.

However, as noted in the “Development Update” posts, despite many months of work on the so-called “nutempo” branch that was intended to full eliminate floating point rounding errors when dealing with conversions between musical and audio time, we chose not to include that in 6.0 (for a variety of reasons). It will be one of the hallmarks of Ardour 7.0. It is therefore still possible (though much harder) to trigger situations where this sort of thing may happen.

We know that there is a lot of work to be done to improve our “compose in the box” workflow, including the MIDI side of that. Hopefully there will be some significant work on that between 6 and 7 (that is certainly the intent).

Hi!
I want to translate the Ardour Interface into basque, I think it’s possible at all. The only doubt I have is how to do that, because, even if I read the translator guide, I don’t really know how to begin the work.

Where do I have to download the files from? Also, I do not know much about git, but I think I could only follow the instructions in the guide.

I would thank a lot any kind of help!

It’s really great to see Ardour 6 getting finished.
I’ve been using it before the -pre1 release and I had a few issues with the MIDI workflow, but I need to make sure if they are still there.
Thank you for your amazing work!

I finally discovered how to get the files. I didn’t know much about Git, but I asked and done a Fork.

Now my question is about ‘./waf i18n_pot’:
I suppose that I could simply edit the .po files and save them with a different name. Isn’t that way?
Consequently, I don’t know whether it’s strictly necessary to create the .pot file.

I would appreciate a lot an answer. Thanks.

Hmm I think you can create a .po file with .po editor (poedit works fine to me, check it out) also from an existing .po file (namely deleting all the translations in another language). Then the ./waf i18n_mo looks in the folder and compiles every .po it finds. Please correct me if I’m wrong because I’m doing the italian translation, so you’d help two translators at once

Working with 6.0-pre1, getting about a crash an hour working with it. They’re random AFAICS and I can’t reproduce them.

Is there a guide anywhere for reporting crashes in a way that’s useful to the dev team? I have the build with the debug symbols and I’m starting from the console and capturing the logs, but not sure what else is necessary to make a good crasher bug report.

Definitely saw some positives in 6.0-pre1 … note on / note off seems much more solid now. I am seeing some disappearing notes but https://tracker.ardour.org/view.php?id=7947 looks very similar to my trouble so I’ll wait for a nightly containing that resolved bug before talking about that more. And the crash recovery has been solid, haven’t lost any data as a result of the crashes.

Is there a guide anywhere for reporting crashes in a way that’s useful to the dev team?

If you have reliable recipe how to produce those crashes, then that is the preferred way. Open a bug report with instructions how to reproduce the issue.

Otherwis a backtrace is needed. On GNU/Linux with a nightly build, start Ardour inside a debugger. Install gdb (the gnu debugger) if it’s not yet installed on your system, then

Thanks Robin! And thanks for your help in IRC getting the gdb issue settled.

The traceback I got mentioned calf.so and so I uninstalled the calf plugins. I had heard bad things about them but had never been bitten before today. Ardour6 has been solid since!

If someone else can confirm this, should I add it as a bug or was it a delberate change?

See here, I believe it will answer your question. If you have further questions about the donation/support process though ask in that thread and I will do my best to answer:

Ardour newbie : process to get rid of "silent break"? Linux

Here is everything explained: https://community.ardour.org/download_form Please click on download and select your OS. Then you can choose. [Screenshot_2020-04-01_10-03-06]

I donate, where will the ‘next two versions’ deal kick in from, the donate page seems to suggest it would be from 5.x

Keep in mind that donations have nothing to do with this. When you click on the “Donate button” you’ll get to this page: 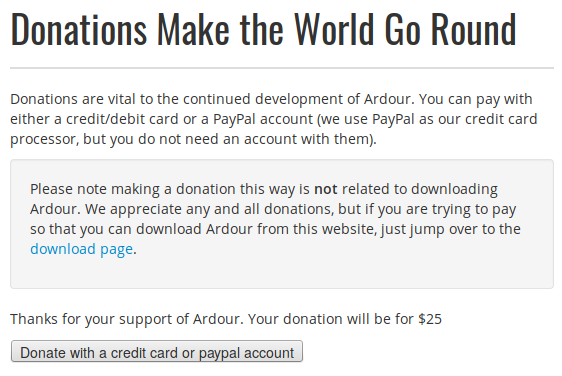 The donation system is entirely separate from the download system, and exists mainly become Linux users generally get Ardour without payment via their distributions’ repositories. Also some people just feel like being generous. 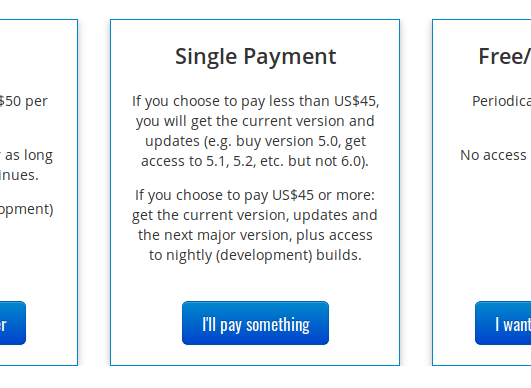 a bit I want to capture from yesterday’s gdb/irc work:

When I first ran Ardour6 with the debugger:

It didn’t start, but stopped with this exception:

Not sure of the root cause, but the fix was to execute this command in gdb just before the run command:

so if you get jacked up in a similar way, try that. thanks again Robin!

Ok cheers, that was the confusion.

Also, if you use poEditor, it has an option to automatically create .mo files at the same time it does a .po, so that’s a good option too.

The doubt I still have is about this: to ./waf i18n_mo generate the correct files, the new translated files have to be it.po/eu.po and automatically does the work?

We can talk more longly if you want, and that way make more easy the translations.
My email: porruren-grabatokia@riseup.net or porrumentzio@riseup.net
My Telegram alias: @Porrumentziotarra