This post is here for people that would like to here differences between to similar tracks (treated with different effects for example) along the listening without playing around mute/solo. It can be used for stereo or multiple channels.

Since I’m doing ambisonics using tracks with 16 channels or more, I needed to be able to gradually switch from a track to another without stopping the listening. To be more precise I wanted to compare « on the flow » encoders that lead to very slight differences, so playing around mute/solo wasn’t convenient at all to hear these differences.

Most of steps are detailed with screen captions (in french) at the end of the post.

1) Prerequisites
Let’s say you have two tracks A and B that you want to compare, having Nc channels each (in my example they both have 16 channels).
Create a third track (quoted CF) with 2*Nc input channels (32 inputs in my example). Select the “In” input, and bypass the VBAP mixer if you have more than 2 channels,
Add the plugin « Stereo DJ X-Fade » to the track CF (the plugin can be found here : http://x42-plugins.com/x42/x42-xfade)

3) Plugin Pin Connexions
Right click on the « Stereo DJ Xfade » plugin in track CF and select “Pin connexions”.
Click on “Manual config” and add/remove instances until you have Nc/2 instances (8 instances in my example)
Add/remove audio outputs in order to have Nc output channels (16 channels in example).
Right click on the connexions and select “Reset”. You should have something like my example : 4 inputs and 2 outputs connected in each instances

4) Crossfade controller :
Double click on the plugin in track CF. The Nc channels coming from A and B can are now mixed, you can gradually switch your listening from track A to track B using the CrossFade controller (first slider).

You’re done ! I hope this was clear enough, I’ll update my post if necessary 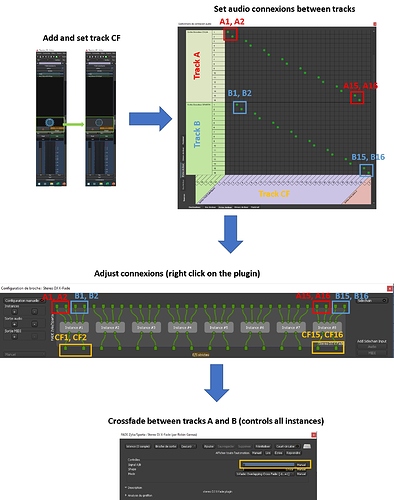