Hi everyone !
Has someone tried to connect VCV rack to Ardour ? I can’t find it on audio or midi in jackd.

I’ve certainly done this, but only with versions predating the 1.0 release of Rack. I haven’t tried it with 1.0. Also, I was on Linux at the time.

I highly recommend to use https://github.com/bsp2/VeeSeeVSTRack instead.

That works inside Ardour and state is also saved directly with the session. It also fixes some conceptual issues that VCVRack itself has, most notably it uses synchronous processing.

One downside is that VST version by default exports 10000 parameters. Ardour 5.12 creates 10k automation lanes when you load the plugin and this can take ages. – This has been fixed in Ardour/git.

Okay, I opened it from Ardour. It’s not so long to launch it (like 10s), but I can’t open files. Also all the visuals are very different from VCV rack ones.
It’s too bad maybe I can’t find an other way …

Ok, eventually it works with VCV rack, I had just to select jack on the output

I was starting to cook up a little instruction on getting VCVRack to work with Ardour – noticed that Louis got things to work, but in case someone can indulge/correct me if I could be improving something on setting up Jack things a little better. (I’m new to VCVRack)

I was looking at this recently with VCVRack and it’s not intuitive because VCVRack does not autoconnect the jack cabling and instead generates audio ports to be manually cabled later.

Here I did the following test – vcvrack takes one audio port from ardour and then routes it to the system speakers. I keep the example simple enough that only one VCVRack-cable in its own interface is needed to do the test… so no manipulation of the audio is done within vcvrack, just a basic audio-rerouting to see if vcvrack can perform taking an audio port from ardour and being able to do something with it.

-For the second Audio-8 module, set its parameters to
-> Jack
-> System (1-2 out) < here again it does not do auto-cabling for you, so you will also need to manually cable things with it using your jack-cable manager

Within vcvrack, setup the one vcvrack-cable you see which goes from Audio-8#1’s “1” port to Audio-8#2’s “1” port as shown in the picture…

Now when you play the track on Ardour, you should hear audio on your speakers, as that is the only audio route connecting track->vcvrack->speakers…

This is a simple test for doing nothing more than just re-routing audio from ardour and through vcvrack.

I also did not need to inform on removing all jack cabling – just wanted to make sure the procedure simple enough to test. Basically you just had to remove the jack cable from your test track from going into the Ardour’s Master in-ports, so that when you test the playback again you are not actually playing through ardour’s Master-in/out ports but rather through Vcvrack->System speaker … 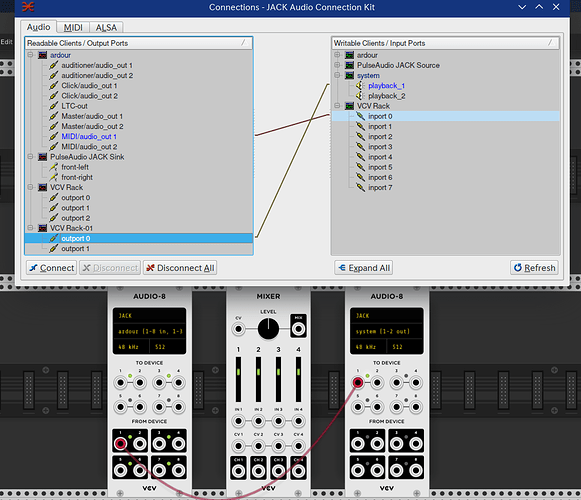 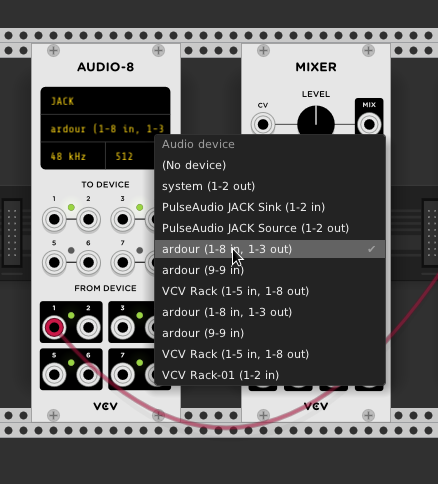 Also it may be easier to avoid using the ‘ardour-*’ options from within vcvrack(when doing rt-context menus on the Audio-8 LCD areas) and instead use 'Vcv Rack (xx in, xx out)" which basically does the same. These alternatives prevent jack ports from disappearing from the jack’s patch panel when you open/close ardour while vcvrack is running – but I guess it depends on user’s preference.

If using VCV-Rack in/out* from the Jack options – you’ll notice it does not show up until you selected one of the initially available Audio-8’s JACK options–> One way to ensure you get the “VCV Rack in” option, is to first select the ‘System out’ on the second Audio-8 module, then you would be able to select 'VCV Rack in" on the other Audio modules… << I do not know if this is a bug or limitation as I am still new to using VCVRack.

If you try to choose “VCV Rack in” alone on one Audio-8 module and there is no JACK things set on another Audio-8 module, then “VCV Rack in” will actually disappear after you choose it. It may say “()” in the LCD panel but there are no new ports in the Jack panel outside VCVRack, so the port option selected in VCVRack actually is failing.

^ If someone knows if this is a bug please inform me, and I guess I can then report this as a problem to vcvrack’s bugtracker though here I cannot determine if this is a bug. VCVRack’s jack port-handling could definitely be improved I guess.

This is very interesting. I was only thinking about connecting VCV rack to the input of Ardour and then play with my midi keyboard. But your technique is better if one wants to edit midi tracks.

On Linux, you can
a) route the outputs of VCV Rack into Ardour Input using Qjackctl or cadence/catia from the KXStudio Repos
b) you can use Skrylars VCV Plugins for jack
c) record VCV with NYSTHIs Polyrecorder (use the Merge Addon to get a Polychanel into the Recorder) and import the Multitrack WAV directly into Ardour
d) install the VCV bridge from old 0.6 Packages

there’s going to be an initial release of “VCV Rack for DAWs” – that should be very interesting considering it would allow presets and patch settings to be saved directly into the ardour session.

more information can be read about it from its project forum,

" The following (plugin, OS) pairs are confirmed for initial release of VCV Rack for DAWs .

Well that’s disappointing that “VCV Rack for DAWs” will be proprietary. I wouldn’t be surprised if someone forks Rack v2 to make it work as an LV2 plugin. Apparently LV2 is such a low priority for the VCV Rack developer that they wouldn’t even spend time reviewing a pull request, so I guess a fork is the only way it will be easily usable in Ardour as free software.

Like @x42 stated above, there is already Veeseevstrack based on version 0.6.1
maybe the developer can focus on making an LV2 version?

Andrew Belt is focusing on other aspects of the development of VCV Version 2 atm, so a VST-version like stated is a nice thing.

But the main reason he does not focus on these developments is, VCV has become more like a DAW itself, less an instrument-plugin.
https://vcvrack.com/manual/FAQ.html#is-vcv-rack-available-as-a-vst-au-aax-plugin-for-daws says:

VCV Rack can be fully considered a DAW itself rather than a “synthesizer plugin”, so Rack is a standalone application. However, due to overwhelming user demand, a new product called VCV Rack for DAWs will be available as a 64-bit VST2 plugin

Nevertheless, LV2 and AU are considered after the VST is done, but are not confirmed.

Like @x42 stated above, there is already Veeseevstrack based on version 0.6.1
maybe the developer can focus on making an LV2 version?

If I understand correctly, Rack v1 and Rack v2 modules will not be backwards compatible with VeeSeeVSTRack which was forked from VCV Rack v0.6. The VeeSeeVSTRack developer has already discontinued development. I have no idea if they’d be interested in supporting an LV2 fork.

Andrew Belt is focusing on other aspects of the development of VCV Version 2 atm, so a VST-version like stated is a nice thing.

But the main reason he does not focus on these developments is, VCV has become more like a DAW itself, less an instrument-plugin.

That is not true. The main design goal of Rack v2 is to support the VST plugin. From https://community.vcvrack.com/t/rack-development-blog/5864/36 :

Add scaffolding for Rack for DAWs , so that the proprietary fork is as minimal as possible, containing only plugin API wrappers.

Nevertheless, LV2 and AU are considered after the VST is done, but are not confirmed.

He just said that LV2 is such a low priority that he wouldn’t even bother reviewing a pull request for it. So pretty much it’s not going to happen unless someone makes a fork.