Clip launching: a first glimpse of a major new feature for ardour 7

Over youtube, I posted a video showing a first glimpse at the clip launching feature we hope to deliver for Ardour 7.0. 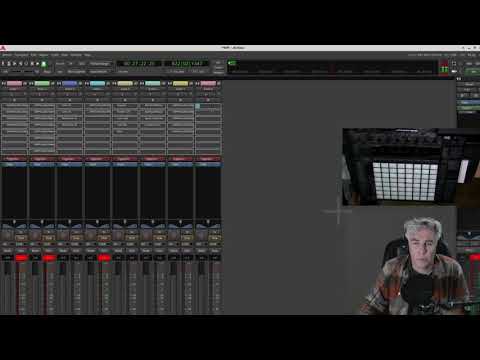 Looks cool! I imagine this is intended for live stuff.
Would it record to a region in a track as well if you are triggering while recording?

Excited for the change - definitely a huge step forward for Ardour. I can definitely see why you wanted to make sure that the nutempo branch was merged before working on features like this.

Is there going to be a scenes view that allows for arrangement of clips across tracks as well ala Bitwig?

Thanks for all your hard work on this.

Scenes? Of course there will be scenes

Wow, an exciting development! Watching you groovin’ a little bit to your creation was a great topper!

This is really exciting!

In Germany, many theaters use Ableton Live for sound playback (we do, too). There’s usually only one track playing, but it’s not as simple as it seems. There might be the start of a song, then a loop somewhere in the intro, then break the loop, increase volume and play the rest of the song. You can’t simply script that because the loop must play until the actors on stage have finished their text. Another things we always do is be fading between scenes.

If you need any insight on the special needs of that use case, I can very much recommend Matthew Skopyks tutorial Series about Ableton for Theatre.

In Germany, many theaters use Ableton Live for sound playback (we do, too). There’s usually only one track playing, but it’s not as simple as it seems. There might be the start of a song, then a loop somewhere in the intro, then break the loop, increase volume and play the rest of the song. You can’t simply script that because the loop must play until the actors on stage have finished their text. Another things we always do is be fading between scenes.

QLab is your friend for that.

Vamping and devamp cues in QLab accomplish exactly what you described.

Now there are more interactive shows that don’t proceed in a linear fashion that live performance aspects comes into play yes, but what you described is better accomplished by QLab for that.

^^ Used Live for theater before QLab existed, and has used QLab ever since.

In the interests of full disclosure, be aware that (at least for early versions of clip launching and maybe forever), there will be memory limits on the length of the audio that can be loaded. Unlike Ardour’s regular tracks, which use a sophisticated streaming/buffering system, clips will live entirely in RAM. On the other hand, RAM is cheap, programmers are expensive

What sort of ram are we talking about? I know it’ll depend on what you’re looking to achieve but say that project you have in the demo video; what’s the minimum ram you’d be looking at for a project like that?

The full set of samples I scrolled through during that video (the “Ashram” loop set plus Apple’s Garageband loops) comes to just over 2GB. That’s the whole set. I used less than 200M of them.

My entire sample library consists of 24GB of files.

Hi Paul great news,it’s possible for developers insert in mode scene function random of clip ? Many thanks and best regards from Naples ( Italy)

Are MIDI loops also on the roadmap for this feature or will this be audio only?

MIDI loops are definitely part of the first version.

Sorry, I don’t understand the question.

Hello Paul. I have a quick question: Is maybe planned to add an undo/redo function in plugins? And thanks for the great work of Ardour. Ardour is really a powerful DAW.

There are no such plans. Right now undo/redo is (almost entirely) restricted to operations that change the timeline. It doesn’t cover plugin parameters or mixer settings.

Ah ok, I think it would be useful an undo/redo function in plugins. But as I said, I love ardour and many, many thanks for your work!

Unfortunately, I still don’t know what you mean. I’m familiar with that entire section of the Ableton manual. If you’re referring to follow actions that randomly pick a clip, yes, we have those.

The difficulty with undo in a program like Ardour is that there are several quite different “contexts” that you can be working in. You’re in the editor, trimming or moving regions. You switch to the mixer, tweak some plugin settings. You’re back in the editor, more editing. Then you use the editor-mixer strip, tweak some plugin settings. Now you want to undo the edits. But the undo history now has a mixture of edit changes and plugin changes, and in a naive implementation (note: in an implementation that is easily understood by most people), you can’t pick some and not the others.