With very unhappy times occurring on the other side of the world it’s difficult to be too happy about anything but after more than a year of work and collaboration the (not) Willie Mack album is released!

The good stuff is at the bottom of the post but hopefully you will enjoy at least some of the story of how it came about…:

These notes are as much for me to remember how this project came to be as to inform the listener… The story of the (not) Willie Mack album.

Early in winter of 2021 while the Covid-19 Pandemic was going full bore I brought a drumkit into my living room… Society was still locked down and vaccines were a dim and distant light on the horizon so really why NOT have drums in the living room?! There was plenty of time to work on music so my original plan was to arrange a couple of Cover tunes I wanted to record and as something new to fend off Covid dementia I planned to track the drums myself. I laid down some bed tracks for ‘Grandma’s Hands’ and ‘Have You Ever Loved a Woman’ and busied myself with adding some guitars. Around this time there was a bit of a lull in the Covid restrictions and I got a call from my friend Dave “Benny” Williams who was climbing the walls looking for some music to work on so I told him about these new tracks and we agreed to get together so he could lay down some Hammond and Piano parts. Tracking with masks on and remaining in separate rooms took some of the fun of of the proceedings but it didn’t hinder Dave from laying down some amazing keys. As the mixes began to take shape I was getting the feeling that these tunes had potential to be much more than demos and an idea to do a collaborative fanboy bluesy album to pay tribute to some of my favourite artists started to take form. A dark and dusty cupboard in the back of my brain opened and I remembered a couple of unreleased songs I had done a few years back as a collaboration with another Dave: Dave Phillips…(yep @DavePhillips ) This Dave is also a very talented musician, songwriter and one hell of a singer and this I knew having never met the man in person! Dave and I met on the Interwebs pursuing our common interest in Audio software and he’d written a great song called “Get On Board the Blues” and was looking for collaborators a few years back and as it turned out we were both Blues affectionados as well as Geeks. His song and a version of Blind Lemon Jefferson’s “See That My Grave is Kept Clean” we had also collaborated on were in need of a little sprucing up but were perfect candidates for this project. As I dug deeper in my tickle trunk of broken dreams and languishing songs I found a couple of Instrumentals I’d written: ‘Confluence’ orginally worked on with Peter Cox and Jake McLean, and ‘Hammond Fried Eggs’ and indeed you could have fried eggs on the tubes after Peter and Benny were done with that one! Another Cover that I had been dying to try arranging was Fenton Robinson’s “You Don’t Know What Love is” and it turned out to be a perfect fit as well. As the tracks were coming together I thought some Funk might provide a nice contrast and a funky lick I’d been messing with as a couch doodle grew into a James-Brown-and-the-Average-White-Band-had-a-love-child called “(She Digs My) Funktionality”. It grooved but something was missing… it turned out what it needed was some saxophone and Benny came through and hooked me up with his friend Ken Foster who was missing gigging and looking for something to do. Ken came into the studio and proceeded to slay, his great work transformed the song from lacking focus to being one of the highlights! Meanwhile the eternally sunny disposition of my partner Nancy and our mutual admiration for the slide guitar work of Derek Trucks inspired a Rootsy new song called 'When You Smile (I Can See Your Light)" complete with a surprise sax solo… I’m blessed to play live with the best rhythm section in the world with my literal and musical family in ‘Rated Blue’ and my son Connor lent his considerable drumming skills where the old man wasn’t quite cutting it and my soul brother Peter Cox manifested his patented ‘Thunder Magic’ on bass and took some of these tunes to funky town!

My heartfelt thanks to everyone who were so incredibly generous with their time and talents, this is a really special project to me and it wouldn’t have turned out nearly as well without everyone’s unique contributions. One last thing to clarify… since this was a collaborative effort I really wanted to release it under a group name and the names Williams and MacArthur gave me a brainwave to use ‘Willie Mack’ … I thought it was a lock, it sounded Bluesy and southern and at the very last second when I submitted the album for streaming Distribution I discovered there were already a few artists working as ‘Willie Mack’ so I had to think fast. Anyone who has ever had to name a band will tell you it can literally takes months to years to think up a good one and after working on this album for more than a year I didn’t want to lose my spot in the submission queue so between that (and the ongoing malignant narcissism of course) I made a snap decision to put it out under my name. It really wasn’t what I had envisioned it’s just a formality that doesn’t change the fact that the music is the product of a very fruitful collaboration of chefs… I’m just your waiter!

You can listen free online here at Bandcamp (cuz @paul made me):

If you are already a Spotify subscriber, you can find it here: 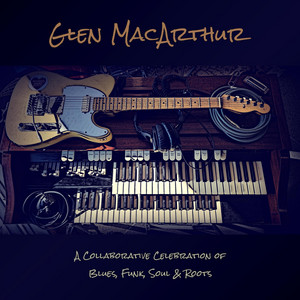 It is also available on every other major music streaming service, just search ‘Glen MacArthur’. CD’s and 8-track tapes are in the works and should be available in a couple of weeks…

I’ll close with a thought/prayer/meditation for the unthinkable situation across Ukraine, especially in Kyiv. It’s very disheartening that we really can’t do better than this as a species…
Best, Glen

Hey Glen, awesome work and a great final product / achievement in the form of this album release !
I really enjoyed listening to it. Congrats to you and all the musicians involved. Added to my Deezer favs

Thanks for sharing the music but also the story about how this album came to be. I always find it interesting how planets align to get a project like this to materialize.

All the best,
Vincent.

Thanks so much! I really appreciate that! I wasn’t aware (or maybe had forgotten) you play sax too!? This album was my first time recording a sax and I learned quite a bit but probably still made some mistakes, I’m sure you must have miking techniques for saxophones down to a science by now. Any wisdom to share?

Well, I think that, officially, I’m a sax player

That’s what I’ve been playing since I was a child and it’s the instrument that my brain is really wrapped around.

When I heard Funkionality (and then When You Smile) I actually told myself you did a great job rendering the sax ! round and warm, I think you nailed it ! I would have put a little less reverb but that is a matter of taste

Did you run into specific issues or surprises when recording the sax ?

I doubt I have any info that you would not have heard/read somewhere else and I’m by no means a reference on the topic but here’s how I generally do it…
Mic position and choice of course depend on the recording conditions (with full band or tracking individually). I use a SM57 if recording with other instruments and generally use a large diaphragm if tracking individually (although I have sometimes used the SM57 too).

Like other wind instruments (but unlike brass such as trumpet) the sound of the sax not only comes out of the bell but also from the holes under the un-pressed keys so you get a better rendition of the tone if not aiming the mic straight at the bell but angled a bit towards the keys. I generally place the microphone about a foot away, maybe a bit more (depends if alto or tenor sax) so as not to get too much clicking sounds from the keys and still capture the sound that comes from the body of the sax with nice harmonics.
I do the same if, in live conditions, I use a small microphone clipped to the bell. It’s not pointing straight down the bell but angled a little to also capture some of the sound from the body.

I’ve seen some engineers use two microphones (one dynamic and one electrostatic) to tame the dynamics and still retain crisp sound. I find it a bit overkill … Lots of trouble for minimal benefits (in my view) … and as usual with two microphones, all sort of phasing issues can occur so I personally don’t go down that road

Excellent advice, exactly the kind of details I was looking for!

Maybe we will do a collab someday…? I’ll trade you hand percussion work for saxophone work…

The sax player did tell me ‘don’t mic the bell!’ so I used a large diaphragm (Blue, Baby Bottle) about half a metre in front of him, the only ‘surprise’ was how loud a sax is!

Thanks for taking time to explain so well!