due to compatibility, I have to use Logic Pro X when creating projects with my drummer. The workflow is that I record guitars first, arrange all my tracks, send him the project, he’ll play drums and edit the project accordingly, does some mixing, and sends it back.

However, I would like to switch to Ardour for solo projects and/or even recording my guitar tracks (so that I record them in Ardour and only add the tracks to Logic when I need to send him specific things). One thing I really, really like about Logic, though, is the automatic drummer. I set the bpm, add a drum track, and am able to record my guitars (I really have issues with the regular metronome, so this works much better for me!).

Is there a way to add this feature to Ardour? Perhaps via some VST (or other kind of) plugin/instrument?

My regular workstation runs linux, and I have Ardour installed. I use a Focusrite Scarlett 2i2 to record on my Macbook, which I could use on the regular workstation instead as well. The only thing stopping me from doing this (yet) is that I really rely on Logic’s drummer as a beat when recording. (just to clearify, after recording, the drummer gets muted and after I sent the project to the (human!) drummer, he’ll add an actual drum track. So the automatic drums wouldn’t even have to be that great for me while recording! I just see them as a better alternative to a metronome).

Thank you in advance for your ideas

You could check out https://www.powerdrumkit.com/ – it comes with a huge collection of grooves and also a “Composer” for putting parts together.

If you can live with a simplistic drum track, then you could add this x42 plugin to a midi track: 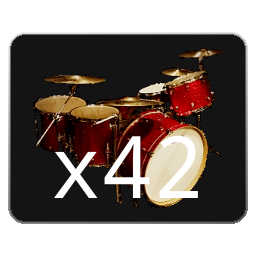 Fantastic kits from AVLinux and son

Then program a simple drum midi-sequence for 1 - 4 patterns and Multi-duplicate the pattern to run for 5 - 10 minutes.

Then create a template from this session and use it to open new ones. Now when you want to start recording you just use this as a template for a new session, adjust the BPM to your liking in Ardour and off you go.

This is how I skip using metronome, although I have a custom made soundfont with recordings of my drum machine Alesis SR18 running in a-fluidsynth plugin, but the principle is the same.

I like to do similar to @mhartzel - and I’ve found good old fashioned paper drum patterns are a good place to start like e.g. http://www.personal.kent.edu/~sbirch/Theory/21341%20CMT/Drums/Drum%20Beats%20and%20Grooves.pdf

You can use those patterns to write in your midi notes, but you can also write variations as you need them - plenty of ideas to choose from.

I’ve not huge luck with importing midi drum files - but I think that’s a thing - I don’t know if other people have found a good source for them, and ways to use them? (I seem to have problems with exporting a midi file from Hydrogen for example and importing into Ardour - and the drums not matching the notes, or all the notes are on a single instrument - so I don’t bother now. I quite the paper method!)

Powerdrumkit is fantastic, a Linux version would be killer, but even Windows version seems not being developed since a couple of years.

And if you need some variation, you could use some free GM midi loops to generate different grooves: 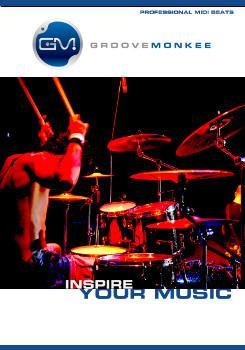 Thanks for the ideas, everybody.

I will try each of those and see, how well they work for me