I’m Thomas, 57 years old and have been working with Ardor for a long time. One question has remained unanswered so far. I made an audio recording that seems a bit weird and inexplicable to me. The photo created shows a four-track recording in one audio track.

The channel mixer strip shows 1/2/1/2 - it seems that for some reason you managed to create a track with four input audio ports. So effectively the second pair of channels is redundant and does nothing but add to the track’s output level (and occupy harddisk space).

Furthermore from looking at the waveform it seems that left and right channels are identical, which would also hold redundant data, but that might be just the appearance and can’t seriously be judged this way.

In my opinion, the right thing to do is to create a proper stereo audio track and re-record. Remove the 4-channel track and clean up/reload/flush wastebasket of this session to finally free the used disk space.

Generally, multichannel audiofiles make sense for multichannel playback (5.1 etc., WFS, ambisonics) so you can pass a file around and don’t have to care about syncing the channels. I don’t have experience using such files, I’m sure other forum users have better advice or know about other use cases.

Thank you for your quick reply. Try this. Create an audio track with 4 channels. Assign four inputs and record a piece of music. Then change the outputs on the audio channel and set the surround panel to reset. As in the picture. Don’t pay attention to the bus channel. 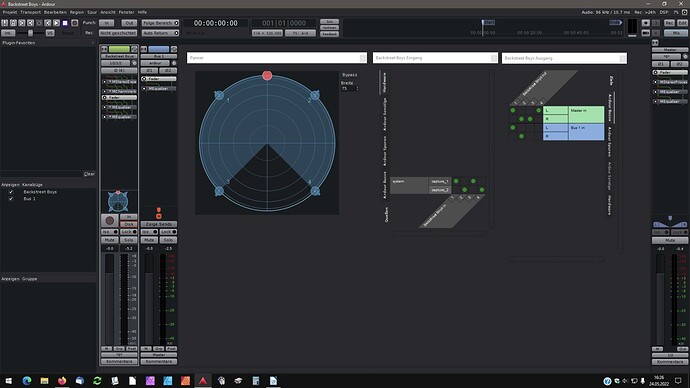 Some use 36 channel tracks (5th order ambisonics), or 51 channels per track/bus.
But you also need a soundcard that supports that many channels.

If you only have a stereo system, then nothing really.

I cannot quite follow - you initially asked what to do with such a 4 channel track, I tried to give a meaning- or helpful answer, and now you give me a use case to try out? So in fact you know very well what this setup is about?

And couldn’t that same effect be achieved from a stereo track with added outputs?

Anyway, I’m at work in my theater, sitting standby for lighting tech work, next to a stage where they create and rehearse a complex multimedia spectacle for Wiener Festwochen and don’t have a sound system or headphones connected to this PC, and can’t spend the time needed for setting all this up.

Thank you for your quick replies and your support.

Mr. Gareus, of course I don’t own such an exclusive sound card.

It’s just a small media chip in the standard computer.

But I’m very enthusiastic about it. You’re a successful programmer. I prefer to use “Midi Chord” when I’m working with the MIDI keyboard. Your drum plug-ins are a good one thing. I also appreciate the meter plugins. I’m particularly interested in one meter plugin (see figure). 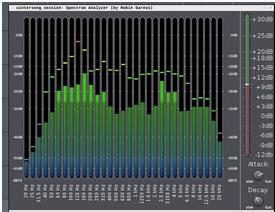 Where can I get this one meter plugin for free? Just this one.

Mr. Aichinger, I’m an Ardor beginner! And I’m so enthusiastic about Ardor that I keep trying new things. Successes motivate me and make me want to share them with other people. So also in this case.

If you are working with a stereo track and 4 outputs, 2 recording tracks will be empty. This means that no signal arrives at 2 virtually routed tracks and cannot be processed audibly. I am convinced that you should record 4 tracks to achieve this targeted effect.

Yes, Mr. Aichinger! I don’t want to disturb you during rehearsals. Thank you again for your support. Thanks.

If you are working with a stereo track and 4 outputs, 2 recording tracks will be empty. T

If you want to send a two channel track to four inputs, you can send a single output to multiple inputs, so just use the audio routing window to send each of the two tracks to two different inputs.

Many thanks for all explanations. Sometimes it’s a bit difficult.