So how do you sync Blender and Ardour? (I am reading the manual and spending a lot of time learning everything else)

Why would you want to do that? Classical workflow is to finish video-editing and only then begin work on the soundtrack and mix (except for music-videos, where it’s the other way 'round): Focus on one medium at a time.
This question usually doesn’t come up since video-editing, color-correction, audio-engineering as well as audio-mixing and mastering are all vastly different tasks, performed by different engineers and operators. Usually even dialog, sound-fx, and film-music are mixed separately.

That being said, both Blender and Ardour can be synced to JACK-transport timecode.

So how do i do that with Jack?
Is there a step by step guide somewhere?
Have you ever done that?
And do you know if it can be done with the other software as well?

To answer your question on “why”, its simple really. Early collaboration. I understand typically how things run but that doesn’t mean we can’t trying to push the boundaries of innovation.

For example why not have this be synced across the internet so that artist can work from anywhere like they are in the same room?

Have I specifically done it, yes, but it has been literally years. I can’t even remember the status of the Jack plugin for Blender right now. You have to tell both programs to sync to Jack, for reference a quick google turns up this thread:

@Reuben Thanks, can you please tell me how you do that, step by step? If you can do a blog post and/or video, that would be fantastic.

Which mentions how to set Blender to sync to Jack (I guess the plugin isn’t needed anymore). In Ardour you can also tell the software to sync to Jack (Use the Jack audio backend primarily).

In as far as your other software you mention, the first thing you have to check is whether they support either LTC, MTC or Jack Sync. For LTC and/or MTC it has to generate or receive it, not just use it to sync clips on the timeline. It has been some time since I played with Ardour chasing LTC or MTC, but the basics are you need to get the audio or MIDI into the appropriate port of Ardour. If the program doesn’t support any of those (Which some of those I am fairly certain don’t) then you will not be able to sync them with that.

Now all this being said, having done several 48 hour film projects with a team of talented animators across the globe simultaneously working in Blender, I can suggest that the particular use case example you suggested would be a horrible working example in reality (And in far less likely to work across the internet anyways as the requirements for LTC/MTC/Jack sync typically are far more strict). If you are thinking about being able to review work, I generally find a well set up video conference works better for this, for instance I have been working on a session with a musician lately that I have Ardour broadcast over a google Meetup, along with my Mic mixed in so that we can work on arranging and editing the piece together, which has worked out really well.

Where I can see this workflow working is much more when dealing with a ‘one man band’ that is directing, animating, and editing audio all at once, but in that case rarely do the people that i know that do that use tools outside of the NLE for this purpose and often the good animators may not have the skillset to take advantage of the extra power offered by a DAW on this, which tends to lend itself towards exactly what Robin mentioned. Preview purposes I could see being similar, but I am not sure how much benefit you would get vs export a revision and import into Blender or the NLE for preview for a team.

To sync Ardour with blender (in Linux):

Some linux tips:
( if you know all this stuff - just ignore 1,2 steps)

In Jack
3. Start the Jack running (through the Cadence: (tab)System>JACK Status>Start) or use QJackCtl like Unfa’s doing.

In Ardour:
4. Launch Ardour using the Jack Audio System (You can usually choose the ALSA/Jack option in the “Audio/MIDI Setup” window which appears when you launch Ardour the first time).
5. Enable external position sync in Ardour 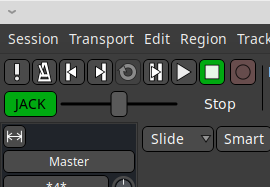 Something additional in Ardour must be checked:
Edit>Preferences>Sync>External Synchronization>External timecode source: JACK

I appreciate what you have said about your 48-hour experience, though I disagree with you on the helpfulness that this would be and I am ok with that.

Still, I am trying to connect Ardor to Blender on a Windows 10 Machine.
I have also made contact with devs about the above programs and possibly getting connections made to Ador which will be great to expand Ardours popularity and dev growth of the program.

Any help on making this connection on a windows machine would be great.

JACK/qjackctl is available for Windows. Last I tried it wasn’t too hard to set this up, but it needed some diligence (the default settings are all wrong, you need to manually change it to portaudio/ASIO…).

The big question is: Does the windows build of Blender support JACK?

I expect that it doesn’t (since there are a lot of caveats when building a JACK app for windows; see https://github.com/x42/weakjack)

Ahhh thats kinda crap. How is this possible in 2019? Feeling kinda bummed out.

PS. There is http://jackaudio.org/faq/jack_on_windows.html (just in case that you have not yet found it).

just dug this up https://github.com/szaszak/blender_velvets

Well test it out tomorrow