Ardour 7.0 Delete all CUE markers at once

How do I delete all CUE markers at once ??? 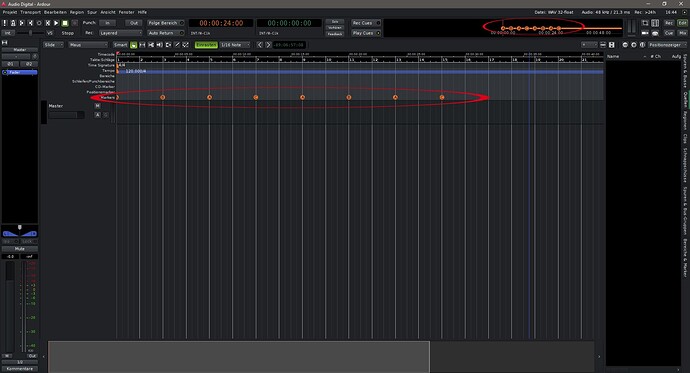 I can’t find one right now but you can always click Window → Locations (Alt+L) and hit the X buttons.

At this point in time there is no built-in operation to delete all cue (or all location or all range) markers in one step.

Thank you for the quick good help.

As noted on tracker.ardour.org, already implemented.

Many Thanks. I can only look at this in Ardor 7.1.
Extraordinary Question: What is a “Git Master”?

Git is a source code repository system. It is a way to contain the source code and all revisions of it. It can also have ‘branches’ which are typically used for different development efforts, for instance the time/tempo work that was a lot of the backend work of the 7.0 release happened in a ‘nutempo’ branch that was later merged into the ‘master’ branch. That way it can break aspects of Ardour while in development and not affect the primary version of the source code versions are built from.

The ‘master’ branch is what typically represents what the next version of Ardour will be built from. When development on a branch or feature is stable enough it can be merged into the ‘master’ branch, but in a lot of cases bugfixes might happen directly on the master branch. As a result when building Ardour unless you are testing or developing a certain feature it tends to be the master branch you are building.

Thank you for your prompt reply.

In summary, it means that a feature request will appear in the next partial version or in the next main version.

Did I understand you correctly?

However whether a feature is implemented in git master is obviously dependent on whether anyone has had time to actually write the code for it, and if it isn’t in git master, it likely will not be in the release.

That was understandable. Thanks again Seablade.

Thanks also to Paul for the implementation.