The Applied Computer Music Technologies ACM-SA and ACM500X-Series of analogue modelled plug-ins for Linux have been updated to V3.1.2 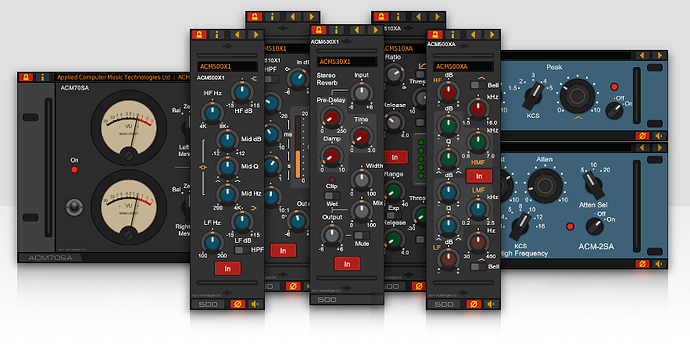 Hi Mike,
Could you please provide a changelog for this update?
Thank you,
Attila

Could you please provide a changelog for this update?

There are no significant feature additions or changes to existing plug-ins, internally some of the code has been updated to use the latest iteration of the GUI engine, and the licensing popup / messaging has been improved, together with various icons - but to the user they should function as before.

The most significant change is the addition of JACK compatible standalone versions, and the requirement for more recent (Ubuntu 20.04 OS or newer vs 16.04 or newer for the previous VST plugins)

Thank you for your reply.

Why don’t you provide a changelog on your site and in the plugin downloads or in the manuals by default?

And the manual of the ACM-5SA is still wrong where and when it says:
Reference Level: 1.0f is assumed to represent 0dBFS.

Correctly it should be:
Reference Level: 0dBu = -18dBFS.

Correctly it should be:
Reference Level: 0dBu = -18dBFS.

1.0f is 1.0 as a float, where in audio those numbers tend to be between 0 and 1. 1.0f is considered full scale in most cases, and MIke is absolutely correct that 1.0f should equate to 0dBFS.

0dBu is an analog reference, equating to 0.775V. Many people will equate this to -18dBFS in their metering, but that is not a guarantee either.

1.0f is 1.0 as a float, where in audio those numbers tend to be between 0 and 1. 1.0f is considered full scale in most cases, and MIke is absolutely correct that 1.0f should equate to 0dBFS.

0dBu is an analog reference, equating to 0.775V. Many people will equate this to -18dBFS in their metering, but that is not a guarantee either.

In this case the manual of the ACM-2SA is the wrong one when it says:
Reference Level: 0dBu = -18dBFS.

Yes, both statements are right - but I think the manual should have said 0dBu = -18dBFS for consistency if nothing else. I’ll have to try and pretend it was done deliberately to see if anyone actually reads the manual

After I read the article:
The Hidden Dangers Of Vintage EQ

The Hidden Dangers Of Vintage EQ

Plug‑in models of classic hardware can sound great if you feed them the right level. But what level is right?

and I purchased your plugins I started with their manuals

Regarding the sound I’m after, I found that I have to drive them with around -48dBFS RMS (-30dBu). As I go above this level some stereo details and space and air starts to vanish from the sound – for me.

All the ACM-Series plugins also feature fully de-cramped filters (without additional latency or requiring CPU intensive oversampling) to ensure the correct equivalent analogue response, even at low sample rates, together with smoothed / interpolated controls to avoid glitching or ‘zipper noise’ when adjusting the parameters. Both features which are not found on some other similar plug-ins.

I’m curious, are you using https://www.vicanek.de/articles/BiquadFits.pdf or AES Convention Papers Forum » A Generalization of the Biquadratic Parametric Equalizer or something else?

I can’t discuss the specifics of it here but for a peaking EQ response, the filters are similar to those described by Orfanidis et al. The basic principle being that you need to design your filter response to have the same gain at Nyquist as it would have in the analogue domain, rather than unity, as is the case with a cramped response.

For (resonant) shelving, the method is more involved, but suffice to say that you do still need to adjust shelving filters too as otherwise the slope deviates from the expected (analogue) response significantly as you approach Nyquist).

Within specific plug-ins there may also be some freq / gain / Q dependency but this is intentional and not to be confused with a cramped response. (There is sometimes an assumption that de-cramping is not important because it only happens at high frequencies, but for certain types of filters / parameter choices the effects of cramping the response at high frequencies extend noticeably into the high-mid range too).

There’s a whole discussion to be had about alternative approaches - for example:

Obviously you can use a higher sample rate - however this doesn’t stop the response being cramped, it just moves it so far out of the audible range as to be negligible, comes with a CPU penalty and may not be appropriate for the target medium (meaning you eventually have to sample rate convert anyway, with attendant artefacts).

Similarly, internally upsampling comes with a (possibly worse) CPU penalty, and the up / down conversion process normally adds latency, and in some cases ‘pre-ringing’ artefacts, and, if you chain multiple plug-ins together, you could be up / down sampling between each one.

Some DAWs (Reaper IIRC) provide the option to oversample the entire plug-in chain, but that option should be used with caution because some plug-ins may blow up with (extreme) higher sample rates (e.g. 4, 8 or even 16X) and you will still run into some of the issues mentioned previously - just maybe not quite as bad as converting up / down multiple times in individual plug-ins.

That’s way more than you probably asked for, but it seemed a logical place to show that there is no ideal solution. I decided to go with what I thought was the best in terms of additional CPU usage, latency and audible performance.

Are the Overtone version of the plugins also de-cramped?

Are the Overtone version of the plugins also de-cramped?

Yes, they always have been. I just didn’t realise it was anything out of the ordinary until recently. I assumed all plug-ins were, but apparently that isn’t always the case.