Linux users, put down your config files and save that new distro install for another day… 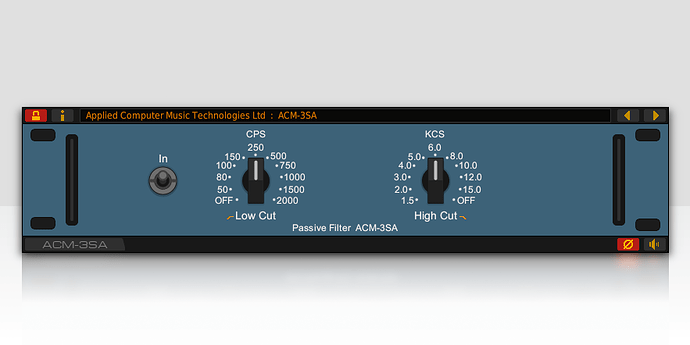 You are doing great plugins and I have some of them (from OverTone DSP).

However, it’s one thing I haven’t understood: Why would one use the ACMT ones instead of the ones from OverTone DSP?

However, it’s one thing I haven’t understood: Why would one use the ACMT ones instead of the ones from OverTone DSP

What we wanted to do was to build on the DSP from the original OverTone range, add some features and make some changes without changing the character of the original plug-ins. At the same time this is a useful opportunity to focus resources on creating a great set of analogue modelled plug-ins specifically for Linux.

For example, the ACM500 has an additional high-pass filter and improved gain ranges for the high mid and low bands when compared to e.g. the EQ500. The ACM510 has a side-chain HPF as well as an improved saturation model and more ‘standard’ reference level of 0dBu = -18dBFS when compared to the DYN500 (it was a deliberate design decision with the DYN500 to reference it to more ‘digital’ levels. The ACM-2SA, 5SA etc also have an imporved transformer saturation model in the tube amplifier emulation and are also aligned to a -18dBFS reference level. In addition there are some plug-ins which you won’t find in the current OverTone range, for example the ACM500XA and 510XA which model channel dynamics and EQ based on one of the world’s best known (British) recording consoles.

You can find the full range of plugins at https://www.acmt.co.uk/products/

If you download the ‘feature limited demo’ (all demos are actually fully featured, they just fade out periodically) you’ll see it also provides you with an activation code which removes any limitations (as is explained in multiple places on the website). This is just the easiest - technical - way to provide the plug-in for free (as in no cost). It’s not meant as a political statement, its just a plug-in. Sorry if giving you something for free offends you.

I’m a long-term Linux user myself. I’ve also contributed to open source projects in the past (including ardour). Primarily I made these things because I wanted them to exist, and I thought others might appreciate them too. Whether you buy them or not is your choice, it doesn’t mean I’m doing anything wrong by giving you that choice.

He already has, for many years already… first with some of the best LV2 plugins that Linux had ever seen circa 2010 and later with LinuxVST’s. Sure there was a short break in there and then we got all of the OverToneDSP goodness back in Linuxdom with this ACMT line…

There are many of our community that are quite happy and comfortable with mixed sources for Audio production applications so you’re not speaking for everyone with your overly harsh criticisms, if you’re so about freedom feel free to simply not use ACMT… Throwing shit in the face of the provider of some of the best hardware emulation DSP available on ANY platform is really not going to fly here…

Sorry if my comments come across as harsh. I can’t help that, so I’ve removed the comment. It was honest feedback about the advertising and implied no criticism of the product or producer, which mike has now read, so job done.

Naturally I’m only speaking for myself, but I’m always suspicious of being thrown breadcrumbs. As a long-term Linux user, you’ll be used to the politics of freedom then. You’d do better if you explained why your products would serve Linux users better than the UAD collection, Waves or plethora of free emulations out there

You’d do better if you explained why your products would serve Linux users better than the UAD collection, Waves…

As far as I know those are not available for Linux - will that do?

Since UAD and Waves type parties are not interested in Linux pro audio, we need ACMT type companies here. Of course, we need a stable set of open source plugin developers as well. Both are very important to us. We are on the side of the light, remember that. Peace for everyone. Luckily, I can assure you that all the ACMT and X42 plugins are worth the money. “Linux to all the studios in the world!”

I’m not sure if this is an honest suggestion.

Personally I think it’s preferable to point out why you product is great (rather than bashing others).

As others have pointed out it’s perfectly fine to release and sell proprietary software that runs on GNU/Linux, and we welcome to be informed about plugins that have been tested and are known to work on Ardour.

I could only nitpick about “It’s free”. Perhaps “It’s free, but closed-source” would have been better. We trust our users to decide for themselves if they want to install non-free (closed-source) plugins, or not. After all that’s another kind of freedom.

From a DSP technical point of view I can recommend the ACMT/OverTone DSP plugins, they’re top-notch, but personally I won’t install closed-source software on my main debian system. YMMV.

You’d do better if you explained why your products would serve Linux users better than the UAD collection, Waves or plethora of free emulations out there

Are there a “plethora” of free SSL and Pultec emulations for linux out there?

In any event, I don’t see why these plugins would be different than any other:

If you are committed to only using libre software, move along, nothing to see here.

If you are not so strict, then try them out and see if they suit your needs, if you like the sound, control response, etc. and make a decision if they are worth the asking price.

If you don’t like them well enough, move along, nothing to see here.

If you do like them well enough, then use them to make some recordings, and send Mike a thank-you note for bothering to port his plugins to the (relatively) very small linux market.

I like it and I’m sure I’ll use it a lot. Thank you for making it available for free as in beer ;). I really appreciate that.

Probably yes. I had actually forgotten about the complexities of encoding binaries for different OSs. It’s been a long time since I needed to think about any of that. I’m a musician, composer, creep, weirdo etc. and I definitely don’t belong here

You’re right. I guess I just expressed myself really badly. That goes down as the shortest flirtation with proprietary software on record!