So, a little while ago (as a user, rather than a developer), I found myself trying out a plug-in, with a great looking 3D modelled photo-realistic UI - but I couldn’t help feeling that you can have too much of a good thing. And it got me thinking that perhaps it was time to experiment a little and see if I could cook up something that kept the essence of the original hardware (so the visual cues are there for those familiar with them) but with a more stylized, and modern UI.
At the same time I’ve watched Linux gain in popularity for audio significantly over the last year - with more plug-ins and DAWs being ported all the time it seems (which is great to see, especially as someone who has been involved at some level for the past decade - initially with the linuxDSP plug-ins).
The result is the ACM-2A plug-in - its available through the Applied Computer Music Technologies Ltd website, it’s designed as a high-end product for professional audio production using Linux, and it’s available as VST2 for Linux. 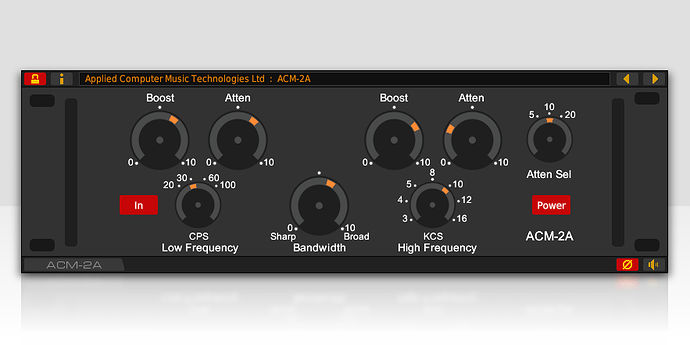 So is that basically PTC-2A without the fancy picture?

I developed a new UI framework - one of the benefits is the ability to render some UI elements algorithmically, so that’s what you see in the new controls. Under the lid, there are some DSP changes (things I wanted to do for a while, but didn’t want to risk changing the character of the original).
Maybe think of it as kind of a ‘limited edition’ version.
The idea is to build on what I had already created, and take it to the next level (at the same time this is going back to my roots, in the sense that plugins for Linux was where it all started, about ten years ago - and it just felt like the right time to do something like this)

Yo this is very exciting. I’ll try out the demo this weekend, and if it sounds good I would love to purchase… my only question being. If I wipe my computer to do a fresh install in a couple weeks/months, will there be anything preventing me from reinstalling the plugin?

If I wipe my computer to do a fresh install in a couple weeks/months, will there be anything preventing me from reinstalling the plugin?

If you keep a personal backup of the plug-in, and the license key file (which is always recommended) then you can just reinstall it.