A-fluidsynth issue with the pulldown menu for patch instruments

is it possible a-fluidsynth(a default plugin available for ardour) can show a pull-down for patch instruments beyond the first patch bank?

Here when I try things, I am able to change the LSB bank but I am not able to list the patches for them using the mouse pull-down, even though I can change them via PC midi messages with the help of an external midi controller.

Here I can show that I was able to change the patch bank to LSB 002 and have the program change for channel 1, and there is no issue with doing things this way via an external midi controller… 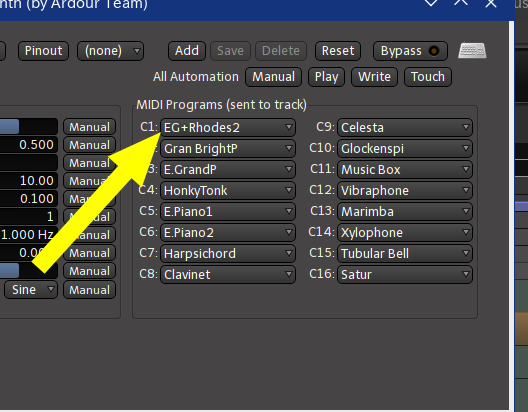 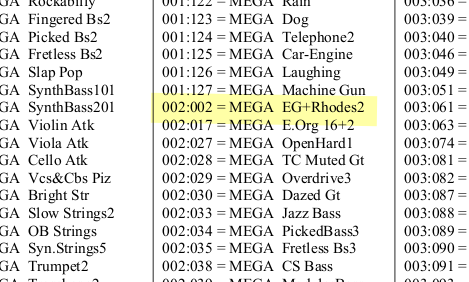 …except that sometimes I want to be able to use the mouse pulldown to switch the channel’s patch instrument to something else within the same bank (beyond the first patch bank) and this gets in the way of doing things.

So the question is can this be fixed?

Bug reports and feature requests should be reported on the issue tracker. A web-forum is not really suitable to keep track of things. Please use tracker.ardour.org in the future.

That being said, if the name is displayed in the dropdown, it can also be selected there in the first place. An external external controller should not be required. All programs from all banks are listed available there.

There is however an issue issue if the name of a given program is not unique (or if the soundfont does not specify a name for a given bank/patch combination). Can you share the soundfont that produces this issue? Can you reproduce this with a known-good soundfont like http://www.schristiancollins.com/generaluser.php ?

In case there are ambiguities, prefer to use the track’s patch-selector available from the track-header’s context-menu.

That being said, if the name is displayed in the dropdown, it can also be selected there in the first place.

Correct. However I am not talking about choosing it from the dropdown initially.The task of changing the patch instrument from another bank can only be done with a bank select message, followed by a prog change when it comes to working with the a-fluidsynth plugin.

True though, what you said about the “patch selector”, I can choose the distant patch instrument from there… but that’s called cheating because it is the plugin window that always wins for the details as is in the majority of cases.

… you’re wrong on the pulldown back on the a-fluidsynth interface however – it cannot be updated to reflect the current patch bank as that’s what the pulldown is supposed to represent.

–> A field item that has been set indirectly by sound bank+prog change messages need to reflect a new combo pulldown list for that newly “set” item.

–> That item is a member(patch instrument name) of a sound bank that needs to be reflected into its appropriate combo-pulldown list.

^ And the a-fluidsynth plugin fails to do just that.

No user interface on any operating system has a bug like this —> When the user clicks on that newly set item, the combo list does not reveal it as a member.

^ this is aweful and is rather quite user-suicidal.

It basically is like telling the user if they have a form with two name fields for first-name and last-name, that you need to open another Window because Window#1 cannot let you type one of the name fields. This is exactly what it’s doing.

This is not an aesthetic issue and it rather concerns function-purpose.

Never mind about the patch-selector, I already know about that… but thanks for reminding me about it…

please reconsider this from the perspective of the user…

To add correction to the OP, the documentation for the goldmidisf2 SF2 map file I was using doesn’t explain what and where to apply MSB/LSB messages for the “xxx:yyy” instrument numbering that was provided in its PDF instrument list.

…
The patch-selector outlines the “patch bank” pulldown along with its equivalent MSB and LSB fields, and that simplifies the search for available and set patch instruments, but that wasn’t the issue that was initially raised…

another matter of communication style … if you want developers (or anyone) to help you, then this sort of description:

No user interface on any operating system has a bug like this —> When the user clicks on that newly set item, the combo list does not reveal it as a member.

^ this is aweful and is rather quite user-suicidal.

is probably a bad idea. We don’t mind hearing about what’s wrong (on the bug tracker for the most part), but we can live without the judgement and attempted assessment of severity.

it cannot be updated to reflect the current patch bank as that’s what the pulldown is supposed to represent.

The pulldown menu always lists all programs from all banks.
When selecting any program from the dropdown, a bank-select message followed by a program select is sent.

If the dropdown would be limited to a single bank, there would be need for a second pair of controls for every channel to select the bank first.

The design goal of was to provide a simple UI that makes it easy to select any given patch, and not expose underlying MIDI details. For the latter, there is already an elaborate version available from the editor.

You should already be able to do that.

Do I understand this correctlt that the actual issue relates to dropdowns?

When a dropdown is taller than than the screen, it may not scroll to the currently active item (true for all such dropdowns, unrelated to patch selection).

Not sure if there was a glitch in the session previously, checking again there are still some UI issues that could still appear when a user is working with this plugin. – so maybe that had something to do with it.

Trying to see if I can replicate the issue again – but @x42 is right, after redoing certain things within the session I was able to list all patch instruments – and for things from all available patch banks, and not just from the first patch bank.

Not sure what went astray, but I’ve noticed graphical artifacts with this plugin previously.