Hold your horses. Editing means also inputting midi data with the mouse. This is an important workflow for creating midi drum tracks and works fine in Ardour. There is no reason to remove it.

What’s the point in recording MIDI data if you can’t edit it? Might as well just record direct to audio.

Same reason why you don’t usually wet record audio. You can tweak the sound of the synth, or replace it, or further automation the synth.

This was in response to the suggestion to remove MIDI [tracks] altogether, so I thought to give the idea a spin. There may be convincing arguments, and perhaps even some novel approaches to be found.

Those could be done with non-destructive editing, which is more in style of a DAW anyway.

It can’t be fixed until we do the time representation changes that will be in 7.0. It is caused by tiny rounding errors. In the test case I used to track it down, for example, the region start was at beat 2.24192 and the note start was at 2.2398.

This does not happen if you avoid mixing snapped and unsnapped editing.

Thanks. I am going to try and minimize the chance of it happening myself, and eagerly wait for 7.0

Is there a bug report filed for this? This is not widely reported behavior … we would not have released 6.0 if it was.

This is something I’ve seen pretty much always. I have probably reported it at some point, but I got so used to it I may have forgotten to do that.

I think can be convinced to agree with you that MIDI editing should be removed as core feature. It doesn’t fit the non destructive workflow of a DAW to begin with.

MIDI recording and playback however is just fine, and perhaps some sequencer plugins can fill the void for those who can’t or won’t use expressive instruments.

Well, I would really not want to have MIDI editing gone from Ardour. It’s flawed, but it’s working for me regardless. Honestly I wouldn’t be able to my daily job without it.

I hope the 7.0 fixes will open a way to getting MIDI on par with audio.

I do think that nowadays a DAW is expected to have both audio and MIDI capabilities, as an artist really can’t do much with modern music without one or the other…

I think that - killing off MIDI would really, really hurt Ardour. And also waste a huge potential and bulk of work that has been done on it.

I haven’t made my rant video to inspire dropping MIDI from Ardour - I wanted to inspire fixing it!

I will echo some and say, please, please do not drop MIDI editing.

I can see the problems with MIDI in Ardour, which in fact led me to to all (well, most) MIDI programming with Muse. But I often times need some edits while recording, and being able to do it directly in Ardour is quite helpful. Tempo ramping is also very useful!

The developers are aware of the problems with MIDI and already made clear that the fix is not simple. It will take time. This is understandable and I’m just happy that they are planning to address it and it is part of their roadmap. Of course, I also would like to have it right now, but I cannot put my coding skills where my mouth is. (Can anyone?)

I look forward to a better implementation of MIDI in Ardour!

tl;dr: MIDI implies several workflows that currently Ardour tries to solve with one MIDI track type that offers a huge flexibility. Maybe, we could have more feature limited MIDI track types, but more specialied in every workflow.

So, considering these use cases that @x42 pointed out:

I agree, doing that with Ardour is very time consuming. Scoring tools offer a better overview in the musical domain, and I would say that music notation is the preferred language over grid/piano roll notation in that scenario. However, I think there is a workflow in the half-way, which is using a scoring tool with Ardour sync’d with JACK. So, in that session/composition/recording you can also use audio. I have used Ardour sometimes that way with MuseScore, and it partially works, but there are several drawbacks that makes the process a bit annoying:

I have not used this, but I think it can work quite perfectly. I see a bit tricky how to switch between plugins or patches. But I guess you can have several MIDI tracks with different plugins, and filter by MIDI channel, so, in the MIDI controller you only have to switch the channel.

This is also doable, although arranging is a bit tedious, but you can do some small adjustments here and there.

I haven’t used that kind of plugins, but they could be more specialized for doing that work. So, it’s understandable that people prefer it.

So, in my opinion, the current MIDI track cannot fully solve all possible use cases. And, in a way or another, users might find some limitations in every scenario.

Maybe that’s the problem, and here is my proposal. Having several types of MIDI tracks, and limit what they can do according to the use cases:

Bonus tool: convert from one type to another. That might work with some quantization process, but it would probably result in ugly results and/or wrong/non-sensical conversions, as usually happens with human interpretations when are opened with notation software

Disclaimer: I am aware that this is a huge amount of work, and I am not related with Ardour’s code base, so my estimation will probably still be insufficient. Also, I am sure I ignore some architectural designs that would be prevent to implement any feature as I have described it. However, I am open to discuss this approach, and I would like to contribute by coding it, if developers and users think this might be a good approach.

This was in response to the suggestion to remove MIDI [tracks] altogether, so I thought to give the idea a spin. There may be convincing arguments, and perhaps even some novel approaches to be found.

I honestly think you misunderstood @GMaq. He was saying via a rhetorical binary opposition to either remove it completely (obviously not) or make it more like—or better than—the “industry standard” (yes, please!). I read it as a plea for the latter not the former…

I would say that being just over a month past the Ardour 6 release I feel a surprinsingly bitter tone in the whole thread.

I’m really not detecting any bitter tone in this thread. @unfa’s “rant” video was the least ranty “rant” video I’ve ever seen. He has a great way of being entertaining while getting his point across. I’d say the majority of the thread is a plea for more advanced MIDI operation. The developers have thick skins (I hope) and can see any suggestions/criticisms about MIDI as coming from a love of Ardour.

I honestly think you misunderstood @GMaq. He was saying via a rhetorical binary opposition to either remove it completely (obviously not) or make it more like—or better than—the “industry standard” (yes, please!). I read it as a plea for the latter not the former…

Yes this is absolutely correct, I would not want to see it disappear at all (just improve

). Thank you @bachstudies for your keen sense of rhetorical binary opposition…

(Do not take seriously) just a Cry from the heart))))
Why LMMS devs didn’t contribute any MIDI skills in to ardour///? Could be so cool if some part of LMMS become a part of Ardour (added sample side bar with pre-listening, add a vertical stick velocity track to midi).

Or this feature could be so good: 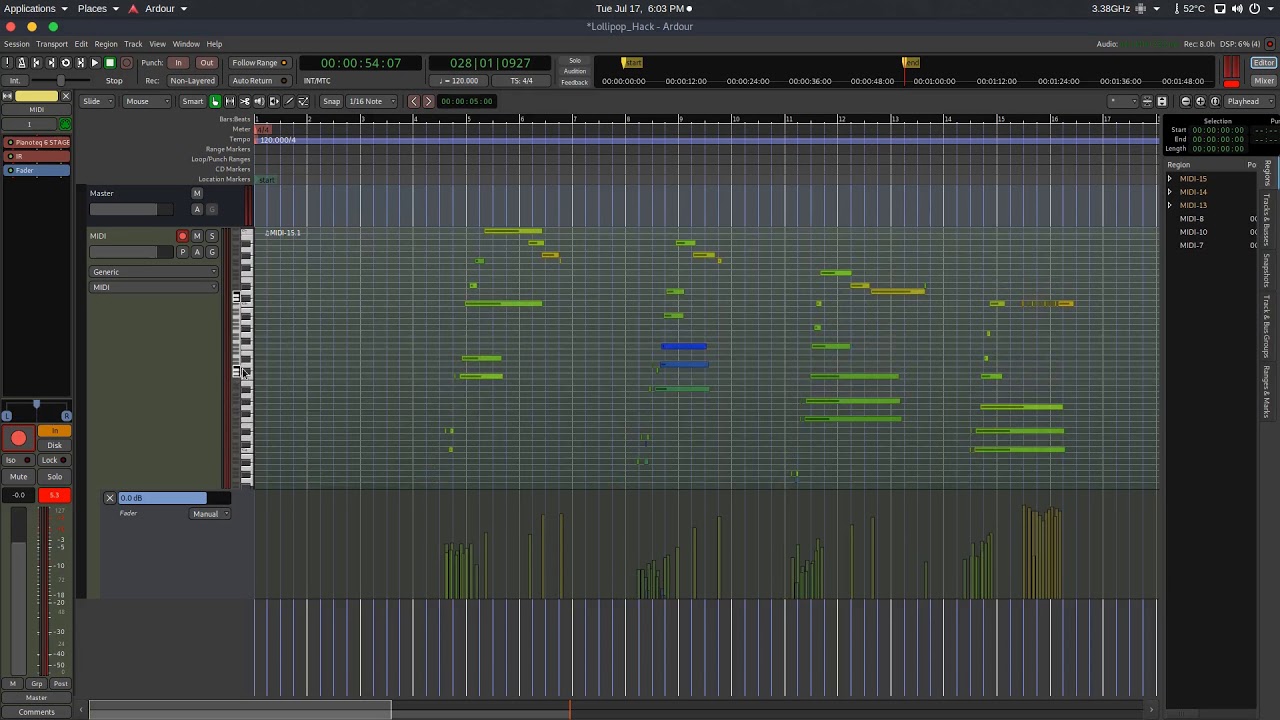 QTractor has some good MIDI features, but it has no so great routing features like Ardour has. Musescore has a score… Hydrogen has a drum sampler… Linux has so many separate open source tasty sweets… If Ardour could join them together////

This is one of those funny things; Yes, there are definitely flaws in midi editing in Ardour 5, and some left in Ardour 6.

Despite those, I have done intense midi sessions in both versions, and for me it really does not get in the way of my creativity. Especially true for version 6.

So yeah, I’m looking forward to the improvements coming in future versions. Until then, I’ll continue making heavily midi based music happily in Ardour 6.

They’re not empty. Just look empty.
Manually resize the offending track a pixel or so and the notes are redrawn.

FWIW I haven’t had this problem since the new version. So YMMV.
There are some other drawing issues though, when moving the cursor over the notes. Not sure how to describe it yet to make an understandable bug report.

There are some other drawing issues though, when moving the cursor over the notes

Check if your issue is the same as this and add your observations to the bug report:
https://tracker.ardour.org/view.php?id=8148

Score MIDI track : some basic musical notation features. Of course, not at the level of MuseScore, but it could start as a proof of concept, and let’s see how it evolves by adding the more requested/needed features. Like previous one, this cannot be recorded, but only edited through the interface.

Or this feature could be so good:

May I interest you in upgrading to v6 so that you could actually use what was proposed in that video?

May I interest you in upgrading to v6 so that you could actually use what was proposed in that video?

I think I don’t understand you question clear…) Do you mean this feature is already implemented into v6? (Didn’t know/that could be super:)) I’ve uploaded the link to this video as an example of how the vertical velocity sticks could be inserted into the midi track (very cool to have a possibility to open it in the same way as an automation track)

Do you mean this feature is already implemented into v6?

The note velocity marker inside notes is in v6 already

Unfa, you told about a piano-roll window. My opinion is that there is no need of separate window, because of need of zoom anyway. When you open a piano-roll window, you’ll need to focus at some little parts of midi event. So you can just zoom a selected midi event directly in the main editor. Opening the separate window is just a redundant operation. I am for an editing in the main editor )) “G”&“D”&“E”-modes are great IMO!! Just may be little improvements and user technics of focusing//

Alexandre, do you mean horizontal lines inside notes?

Vertical velocity sticks let the user get the needed value just for one click (if such function implemented). As I found to correct the velocity in v6 we use scrolling, which is not critical, but not so quick as it could be, especially when you make massive corrections.

Alexandre, do you mean horizontal lines inside notes?

Yep, that’s what I mean

For electronic bit-boxing&synth music the main problem for me is copying/moving pie of midi stuff and automation from one part of session to another. It’s very difficult to select them all (need to select automation headers additionally as you know) and after Ctrl+X. Ctrl+C&Ctrl+V.
But for composition of melodies Ardour is rather comfortable for me: basic functions of copying/moving/transposing/etc notes and regions - are good.
The main thing is a good mode of Robin and Paul!

Thank you guys! Do the best what you want the most!)) But if (by chance) youi’ll get the mode to make some midi stuff - personally me will be super glad and greatful!))) And, I think, Unfa has the same ardour)).