Hoping someone can help - playing around with midimaps for the BCD2000 and using prev-bank next-bank to decide which channels I’m editing. It all works and I have a scroll wheel on my control surface that can move between the banks.

However I can’t tell which bank I’m currently on in Ardour.
I have to hit a solo button to see which one I’m in.

Is there some obvious way to see the bank my control surface is pointing at?

There are no generic MIDI messages that can be sent to the BC* device to change what it displays. If you want that sort of functionality, you need to use it in Mackie “emulation” mode.

I don’t think the original question was about changing the BC device display.
This: “I can’t tell which bank I’m currently on in Ardour” makes it seem like what is desired is some kind of highlighting in the Ardour GUI that indicates which bank is selected. Something like scrolling those channels to the center of the screen maybe, or changing the brightness or color in some way to indicate that the bank (am I correct in thinking “bank” is really similar to “group of channels” in this context?) is now being controlled.

ccaudie - this is exactly what I’m after! And yes the bank is the “current” group of channels being controlled by the control surface.
paul - The BCD2000 (not a BCF)does not have a Mackie emulation mode (or a display!) unfortunately.
I also want to set-up my MPC40 to be a control surface as well and I’ll have the same issue with that.

There is no concept in ardour of display any status for any of the many possible control surfaces that we support.

Paul - so that means Ardour can’t currently show the bank currently set by any midi control surface? That’s what I thought, and it wasn’t just me

It would be nice even if there was an outline around the current tracks being looked at by the bank? Or do you have a better idea? Highlight, background track colour or even a coloured dot on the track information perhaps?
I’m happy to log a ticket in the bug tracker after gathering some feedback as to the best solution.

The problem with this idea is that it requires much closer integration between the control surface support code and the main GUI. Right now, there is very little connection between them at all. Each control surface support module has its own GUI that is totally unrelated to the main user interface. I can see that what you want makes sense and would be useful, I just don’t have any idea right now on the right way to integrate the two.

Reviving this topic as I find myself using a Behringer X-Touch compact that doesn’t have the nice displays of its bigger brother X-Touch and I recognize it’s a bit tricky to figure out what tracks are currently exposed by the control surface.

So back to a native Ardour solution.

Would it be an idea to offer the option to replace or add below the Editor Summary a simple view of the names of the n tracks currently controlled by the Control Surface ?

Mock for my CS that has 8 channels: 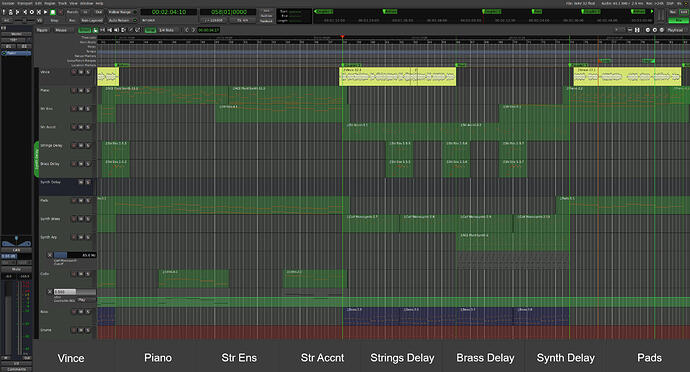 Note that instead of being in the Editor, it could be at the bottom of the Mixer if it makes more sense

I can imagine that if one has several CS, you might need to configure which CS banking is being shown.

I feel it would create less coupling between the CS code and the mixer/editor if it’s “just” a panel and not actually messing with the display of the tracks in the editor or mixer. But that’s just feeling